Did you know that ticks can carry and potentially infect your beloved pet with several diseases? These can cause serious illness or death. In this post, our Westport vets discuss tick-borne diseases in dogs, symptoms and options for prevention and treatment.

What are tick-borne diseases in dogs?

Ticks are intracellular parasites that suck blood from their hosts, and can carry and transmit dangerous bacteria to your dog’s body. These bacteria live inside the cells and can potentially cause many illnesses that infect thousands of dogs every year.

Conditions that result from a tick bite can also cause serious (and in some cases, fatal) long-term damage. That’s why it’s critical to prevent tick-borne diseases and have symptoms treated early by a qualified vet, if your dog does contract a condition.

Though many of the pathogens that cause tick-borne diseases are zoonotic and can infect humans, disease cannot spread between dogs and humans directly. 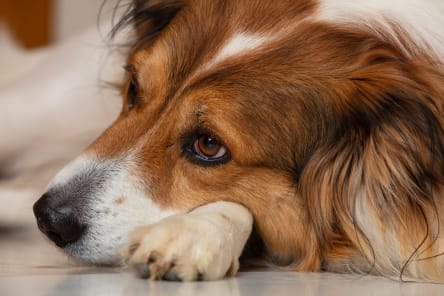 Pathogens need ticks to complete their lifecycle and become infectious. Therefore, a direct tick bite would be necessary to transmit disease. Here are the most common tick-borne illnesses in dogs across the United States:

Transmitted by black-legged ticks or deer ticks, the bacteria borrelia burgdorferi causes Lyme Disease, a rapidly growing global issue. The tick must feed for before 24 to 48 hours before infecting a host.

This illness can result in symptoms ranging from joint pain or swelling, limping and enlarged lymph nodes to lethargy, lameness and fever. These symptoms can progress to kidney failure, which may be fatal, as well as serious cardiac and neurological effects.

One of the less common blood-borne diseases in dogs is transmitted by the brown dog tick. Canine bartonellosis can cause disturbing symptoms, from fever and lameness to altered brain function, seizures, loss of appetite and irregular heartbeat. People can also contract the condition.

Since it can be challenging to interpret diagnostic test results, if your dog has a severe case it may be necessary for your vet to conduct several rounds of treatment and tests to make a definitive diagnosis.

Also referred to as dog tick fever or dog fever, the deer tick carries this disease. Infected hosts can experience symptoms similar to other tick-borne diseases, from lethargy, fever, stiff joints and loss of appetite to diarrhea and vomiting. Extreme cases may lead to seizures.

The brown dog tick, lone star tick, American dog tick and others can carry and transmit canine ehrlichiosis - a disease that’s found throughout the world.

Between 1 and 3 weeks after your dog is bitten by an infected tick, symptoms will begin to appear. Watch for symptoms including fever, bruising or nose bleeds, and poor appetite. Testing may reveal low blood platelets (cells that help with blood clotting).

While canine ehrlichiosis can have better outcomes for treatment, this disease may be more difficult for your dog to recover from if chronic symptoms have developed.

With both canine ehrlichiosis and RMSF, bacteria can be transmitted within 3 to 6 hours of a tick attaching to your dog.

A protozoal intracellular parasite that resides in your dog’s red blood cells can cause these diseases, which include:

While tick bites (from the brown dog tick and/or American dog tick) are the most common causes for this disease, it can also be transmitted by transplacental transmission and contamination of IV blood.

Red blood cells can break down, leading to symptoms such as jaundice (orange or yellow-colored skin or whites of eyes), dark-colored urine, pale gums and lethargy. Other symptoms may include vomiting and weakness.

If your dog ingests protozoa by eating infected animals such as rodents or birds, he or she can contract this tick-borne disease, which distinguishes it from other tick-borne illnesses.

What other symptoms should I look for?

Hallmark signs of tick-borne diseases in dogs include vomiting fever, swelling around joints, lameness and lethargy. Other symptoms may include:

How are tick-borne illnesses in dogs treated?

Early diagnosis and successful treatment are key when it comes to tick-borne illnesses. A number of broad-spectrum antibiotics can be prescribed by your vet in the early stages of disease, but you should beware that they will also destroy beneficial bacteria in addition to bad bacteria.

To address this issue and prevent gastrointestinal issues, probiotics can be prescribed. Always follow your vet’s treatment plan.

Recurring tick diseases can be difficult to control and eradicate. If your dog recovers, he will still need regularly scheduled blood work so any recurrences can be detected. Ask your vet how you can help control ticks.

How can I prevent my dog from contracting a tick-borne disease?

Always remember that prevention should be high priority when discussing tick-borne illnesses. At Poster Veterinary Associates, we offer a wide selection of parasite prevention products to prevent ticks and other parasites from infecting your pet.

However, no method is 100% effective, so carefully consider outings and apply tick control treatments before taking your dog to environments where ticks may thrive. You should also check your dog and yourself for ticks when you arrive home.

Also check your dog periodically throughout tick season (which lasts through spring, summer and fall, and is a year-round issue in warmer climates). They are typically dark brown or black in color, and can transmit diseases within 3 to 6 hours of biting your pup.

If you discover a tick, quickly remove it to prevent infection. Consider bringing your dog to our animal hospital, where a vet will be able to remove it safely.

Do you suspect your dog is suffering from a tick-borne disease? Staff at Poster Veterinary Associates are equipped to diagnose and treat many illnesses and conditions. Book an appointment today.

Poster Veterinary Associates has been providing comprehensive veterinary care for your cherished pets in Westport since 1993.